Summer is in full effect, which means it’s time to take a breather from those out-of-office replies and take a look at email marketing benchmarks for the first half of 2018.

Let’s take a look at email marketing benchmarks for the first half of 2018.

The good news across most industries: after the holiday season influx of emails, engagement and open rates have largely returned to normal (haven’t seen the Email Marketing Benchmarks 2017 Part Two Report? See how the holidays impacted email metrics in the second half of 2017). 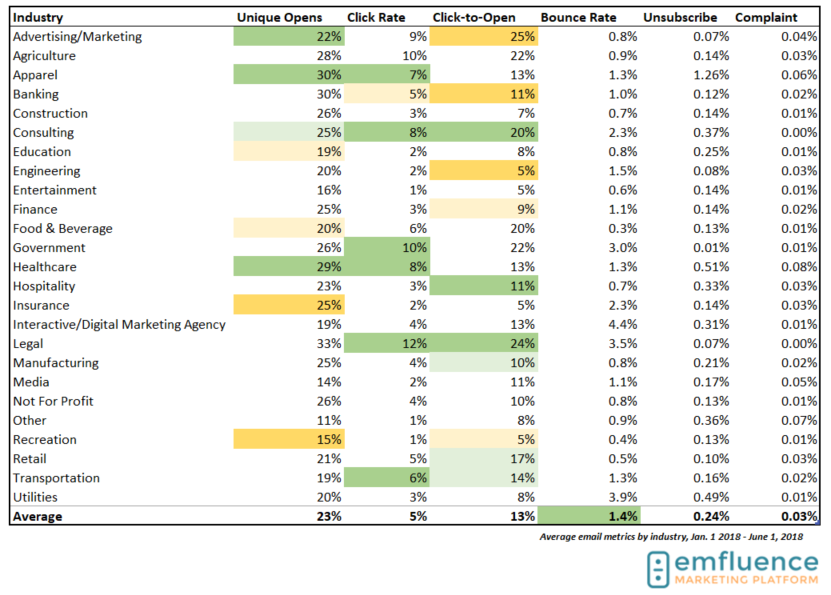 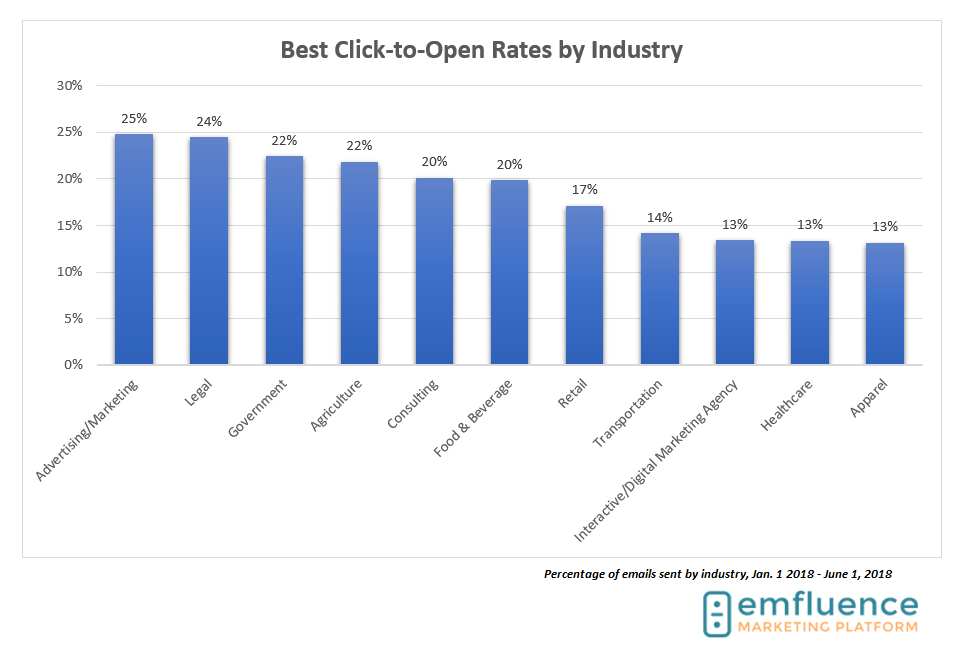 Apparel had a great first half of 2018, with Unique Opens climbing to 30% over their historic average of 23%. Add in a jump in Click Rates from a historic average of 4% to 7% in the first half of 2018, and it’s safe to say that Apparel is headed in the right direction with their email marketing. Perhaps consumers are growing more accustomed to purchasing apparel through online services—which means Apparel marketers could ramp up email-driven sales even more through abandoned cart email campaigns, list segmentation strategies, or incorporating social media into their ecommerce sites.

Want to walk through an ecommerce + abandoned cart email strategy in real time? Check out our t-shirt shop!

Healthcare had a great first half of 2018 as well, with an 8% increase in Unique Opens and double the Click-to-Open rate they saw in the second half of 2017. Legal’s Unique Opens were flat in this time period, but the industry has doubled its Click-to-Open rate over the same time period last year, which is a good indicator that the content served up in each email is relevant to the audience. Hospitality saw a similar trend, with flat Unique Open and Click Rates but almost double the percentage of Click-to-Opens as the industry saw during this period in 2017. And one more industry that saw improved engagement rates—Consulting increased Click-to-Opens from 11% this time last year to 20% in the first half of 2018.

What’s the secret to increased engagement? Obviously there are lots of factors at work, but it’s possible to see these jumps in engagement when you:

Most Email Sends by Industry

The Email Marketing Benchmark Report also allows us to see which industries are sending the most email, like so:

The top industry sender in the first half of 2018 is Retail, with Agriculture and Food & Beverage following close behind. Examining percentage of sends can help us identify the impact of a large quantity of sends on a given industry’s engagement rates, and if you compare Retail’s high percentage of sends to their engagement rates, things are looking up: Click-to-Open rates (as noted above) are climbing, and Bounces, Unsubscribes and Complaints are all respectively below the overall average. Way to go, retailers!

The Bounces, Unsubscribes, and Complaints by Industry

The top Bounce rate in the first half of 2018 goes to Interactive/Digital Marketing, which means it’s time to do some list cleansing, fellow marketers. However, Utilities, Legal, and Government had Bounce rates above the 3% mark, which means list cleanses are in order for those industries as well—remember, a clean list will help you land in the inbox (if you need help getting your list cleansed, don’t hesitate to reach out to us).

Remember those climbing engagement rates for Apparel? Take note, then, that this industry actually had the highest percentage of Unsubscribes at 1.26%, and the third highest Complaints percentage of all industries at 0.06%. High Unsubscribes and high Complaint rates typically indicate a problem with opt-in strategy. This could be anything from purchasing lists (click here to see if that’s a good idea) to opting in people against their knowledge (say, during the cart checkout process), to a lack of good segmentation in the offers you’re sending your email subscribers. So while things are heading in the right direction for Apparel, there’s still lots of room to grow.

As for other industries who might want to reevaluate how they are obtaining email addresses, Healthcare had the highest percentage of Complaints at 0.08%, and one of the top three highest Unsubscribe rates at 0.51%. Utilities had a high Unsubscribe rate as well, sitting at 0.49% over the overall average of 0.2%.

Legal and Consulting each had a Complaint rate of 0%–way to send to people who expect your emails!

The most compelling case to add more automated emails to your strategy? Take a look at the numbers below:

On average, Automated emails had a 34% Unique Open rate (up from 32% in the previous report) and a 17% Click-to-Open rate. That’s not to say that Manual and Transactional emails shouldn’t be part of your strategy, but automation is a great way to stay top of mind, and top of wallet.

Need ideas for adding automated emails to your email marketing strategy? Sign up for our monthly newsletters and get suggestions delivered directly to your inbox.

Banking/Finance and Retail were the industries sending the bulk of their email manually, while Education was the industry sending mostly automated emails.

As noted above, B2C marketers were far more likely to use automated emails than B2B marketers were in the first half of 2018. Looking at Unique Opens by sender type, we can see a slight increase in metrics across the board for B2B marketers, including a 2% jump in Unique Opens, a 3% jump in Click Rate, and an almost 5% jump in engagement. Bounces and Complaints were down for B2B marketers as well. In our last Email Marketing Benchmarks Report, we talked about running regular list cleanses to account for the 25% loss of B2B email addresses as a way to combat the Bounce Rate—clearly a few readers were listening!

Now that we’ve taken a look at the Email Marketing Benchmarks for the first half of 2018, let’s put together an action list of how you can improve your individual metrics in the second half of the year. If you haven’t done so already, try putting the following into place:

And don’t forget to sign up for our newsletters so you don’t miss more reports like this!

Metrics definitions for our benchmarks: